Undeclared work knows no borders. Social partners in the transport sector, i.e. Transport Workers’ Union AKT and Employers’ Federation of Road Transport (ALT), have together with other key organisations, Ministries and supervisory authorities joined the #EU4FairWork campaign organised by the European Labor Authority. The campaign shares information on measures to combat undecla-red work and why it is in everyone's interest to work legally.

Campaign period is September 21 - September 25. You can follow the campaign in the social media under the hashtag #EU4FairWork. 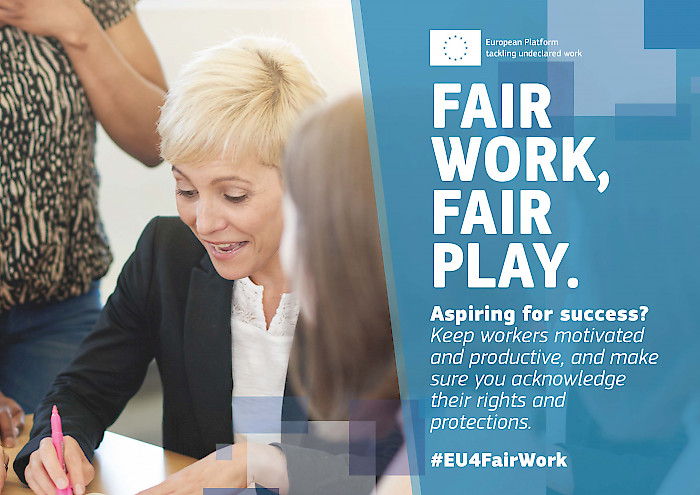 What is undeclared work?

Undeclared work is work for which wages are usually paid in cash, and the wages or part thereof is not declared to the Finnish Tax Administration. The employer does not pay the employee’s social security contributions such as the employment pension, unemployment insurance and accident insur-ance premiums.

At worst, undeclared work may be manifested as severe underpayment of wages or placing a work-er at a significant disadvantage, for example by exploiting the financial distress of the employee or dependent position on the employer.

Why should undeclared work be tackled?

Everyone has the right to fair terms of employment and working conditions. Only work that has been notified to the authorities guarantees the right to social security and appropriate terms em-ployment such as pay, working hours and occupational safety and health. Fair work is not discrimi-natory and does not abuse another person’s weaker position or ignorance. By declaring work, we also build our common security and the public services required by citizens and companies.

How is undeclared work tackled in Finland?

Make sure your employer reports your work to the authorities and that your salary is paid into a bank account. Work only work with a tax deduction form (tax card), and always require a payroll statement. Remember also to require a written employment contract or a written statement outlining the terms and conditions of the employment relationship. In the payroll, you can see that your salary is subject to relevant taxes and social security contributions.

Take great care of your reputation - it's an asset for the company, its employees and partners.

Be reliable and report employees and incomes correctly.

How is undeclared work tackled in the EU?

The prevention of undeclared work is a political priority for the European Union. In summer 2019, the European Labour Authority (ELA) was established to step up efforts to tackle undeclared work and abuses in cross-border situations. The ELA promotes awareness of the EU’s movement provi-sions among companies and workers, better implementation of the provisions, and cross-border co-operation and monitoring by the authorities.

Campaign period is September 21 - September 25. You can follow the campaign in the social media under the hashtag #EU4FairWork.